I done did an Undercity level for this here Undercity Design Contest.

Once there was a wicked city ruled by a wicked priesthood. So wicked, they disgusted even the god they worshiped (gods work in mysterious ways), who turned the priests into vile pigmen. Except this didn't turn the people against them and they seemed to enjoy it. So the god flattened the city with meteors and the city was buried in its own rubble. 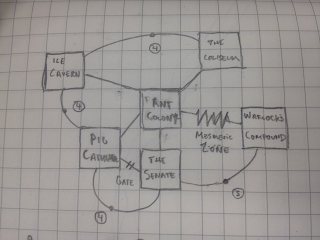 There are some factions that survived the leveling of the city and live on in their underground ruined cityscape -- a semi-Lich, the Shadow Senate, the Pig-priests and the Praetorians, plus two new additions: a giant ant colony and a horror from beyond.

Ant Colony - A bunch of giant ants have moved in, creating a colony that radiates out roughly from the undercity's center, with tunnels running everywhere. The ants survive by eating a symbiotic white fungus that they farm in various rooms -- close investigation of live or dead ants will reveal a white blob of fungus at the back of the head. The fungus is actually an extra-dimension hivemind that has come here to stop Shggu'thupt (see below), although things haven't gone exactly as planned...

Pig Cathedral -- The pig priests have managed to protect/rebuild the main cathedral, in which they engage in unholy acts, many of which produce Pig-Flesh Abominations, genetic cul-de-sacs who are used as guards if they are vaguely bipedal/can grasp a weapon and submitted to various immoral depredations if they aren't/can't. Basically it's like a Bosch painting in here. The pig priests are pretty much hostile to all other factions without really caring about them either.

The Senate - A group of 100 shadows convenes here to discuss the legislative matters of the Senate. They view the ants as the currently rightful citizens of the city and thus will act to protect them if necessary. Since the Senate is restricted to 100 members, they will not fully drain anybody until one or more of their number has been dissipated.

Warlock's Compound - A wizard who threw up a protective shield when the city was destroyed, he now uses a small army of constructs, elementals and summoned beings to search for the last few remaining ingredients for the philter that will allow himself to turn into a lich. He's been pre-gaming with some life-extension potions, so he's pretty mummied-out. Has systematically blocked off tunnels and passages to his compound except for a convoluted and trapped route running from the Shadow Senate and a magically-charged area where anybody who enters has their intelligence reduced to 1 until they leave. Doesn't bother the ants any, there's any number of really dumb folks wandering around in there though.

The Coliseum - The leader of the Praetorian Guard, now a Death Knight, has collected an army of corporeal undead based around the remains of the old coliseum. He plots to overthrow both the Pig Priests and the Shadow Senate. Somewhat limited by inability to get past control undead of the former and the difficulty of damaging the latter.

Icy Cavern - Here lives Shggu'thupt the Frozen, a humanoid figure who appears relatively normal except for the a) eight tentacles surrounding a small hole that might be called a mouth b) the multiple bits of him that are constructed out of some sort of eldritch machinery and c) his white, frost-covered skin. His gaze acts as a cold ray, he can breathe acidic spores onto anybody within 10' of him and he causes constant Fear and Insanity, as well as Confusion for 1d4 rounds. He sits here consuming the minds of anybody brought to him by his insane band of inbred cultists, who roam the undercity looking for potential brain victims. Once he's consumed enough sanity, he will open a portal for his true form to enter this plane, creating a new age of terror and extremely cold temperatures.

What Did You Find


This table/progression of rolls is for if the explorers run into something while travelling between the major points of interest. You could make it an entry on the Wandering Monsters table or make another mechanic for it entirely

Not all the pig priests toe the party line and this little group of them are an outlaw sect practicing Apostate Pig Worship. 1-3 Pig Priests, 4-6 Pig-Flesh Abominations, assorted goodies.

A bunch of undead were hanging out here, just having a good ol' time. Now they are ready to try and eat you. Mostly skeletons, sometimes ghouls. Will have some sort of treasure, although not much.

Lucky you, you just stumbled across a piece of architecture that's out-of-the-way and easily defensible, maybe a room with a door that still closes or a pocket of space in the rubble that can be squeezed into that nobody's found before. You can safely rest here for as long as needed.

Somebody's set up a trap here -- let's see who set it:

If it's the Pig Priests, it's 33-33-33 whether the trap was set up to immobilize, maim or kill. It's how they get their jollies. The Cultists and the Warlock only set out to immobilize so that those trapped can be retrieved and then either a) have their souls fed to something that should not be or b) interrogated regarding the possible location of certain magical fluids and unguents, with the possibility of being paid/brainwashed into retrieving them.

1. Hatchery
2. Junk room -- The ants lump stuff that they can't tunnel through in rooms, handy for you that this is often metal stuffs or very tough containers. Treasure type XX if you're playing Labyrinth Lord. Workers come in every once in a while.
3. Garden room -- Will contain random item producing continual light and a whole bunch of plants growing here, mainly vines. Probably other insects (giant centipedes, scorpions) or soldiers to defend the light source.
4. Fungus room -- Blobby white fungus growth with organic matter stuck in it. Workers going in and out.
Posted by Thomas M. at 6:02 PM

Stuff You Should Read